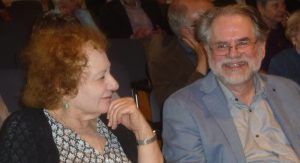 September 22 2020 will mark the twentieth anniversary (Jahrzeit) of Yehuda Amichai’s death. The world-famous poet, novelist and storyteller Yehuda Amichai, who was forced to emigrate to Palestine with his family in 1936 at the age of just 12, was born as Ludwig Yehuda Pfeuffer in Würzburg, Germany, in 1924 and raised there in a Jewish orthodox household.

Although Amichai’s mother tongue was German and he wrote many German poems and sketches, he published all his poems in Hebrew during his lifetime. There were many reasons for this: When Amichai published his first poems in 1948, the forced Hebraization process, which had been driven forward since the language dispute („language war“) of 1913 to the disadvantage of Yiddish and German in the newly founded State of Israel, was still in full swing. Moreover, after 1945, the German language was viewed as tainted, because it had been used by the Nazi Shoah criminals. Thus, at that time, no publisher in Israel would have published anything in German.

Amichai’s lyrical legacy is still impacting Hebrew poetry considerably. Among the contemporary poets, who may be categorized as continuing Amichai’s route, though with different means, Yitzhak Laor currently stands out clearly as one of his most prominent successors. Thus, Laor’s work emulates that of Amichai in so far as it is interwoven with a dense web of intertextual references to the sacred texts of Judaism as dense as that of Jehuda Amichai [see interview with Yitzhal Laor, ARIEL-ART 2/3 (July) 2020].

But Amichai has not only had a major influence on contemporary Israeli poetry, since his discovery by Ted Hughs, he has also been part of the canon of international poetry and is read worldwide. He has been short-listed several times for the Nobel Prize for Literature and has been honored with numerous Israeli and international prizes. In honor of Yehuda Amichai, Israel annually awards the “Amichai Prize”, one of the most prestigious poetry prizes in Israel.

In Germany, Yehuda Amichai was recently honored in several anthologies and essays by the poet and translator Amadé Esperer. In addition, Amadé Esperer has initiated the „Würzburg Amichai-Reading“ ,a poetry reading in honor of Yehuda Amichai, which has been held regularly since 2018 in Würzburg at the beginning of November under the patronage of the Lord Mayor of Würzburg Christian Schuchardt.