A Bat and a Man

A bat could smile,
Bear a child and breastfeed
and also menstruate.
The bat really wanted
to laugh and weep
like a human being.
So the bat summoned a man
In a market fair
For a feast
And have an affair.
The bat treated the man
With a piece of her flesh.
And now
The bat knows
how to laugh and weep.
Her laughing sounds
Like a mourning
Her weeping sounds
Like a laughter
And is heard and spread
All over the world.
The cursed friendship
Sparkles in the sun.

I Am Not Alone

In giving away all my savings –

despite a homeless myself –

To a friend buying a house;

In receiving an award

From a foreign government

For the excellent service

By those who envy me

And my passion to Life,

I am the only one

with a beard and moustache

Am I not alone?

Where is your forehead,

Is taking me to his

He has built in his blissful childhood.

With the same creation,

And even the same God

We are not working enough

The Exchange of Love:

Because of dying humans,

Animals and birds all over.

My friend told me

I will be the first poet

So I can take some fellows to join

To foster our poorest exchange

And be able to cast

The Shadow of Peace

But I don’t deserve you.

So where is your forehead?

I want to kiss and thank you, 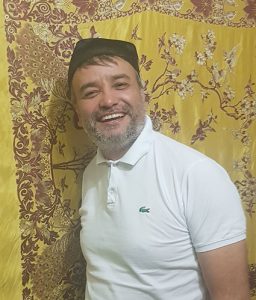 Azam Abidov, poet, translator, short short story writer, cultural adviser, was born on November 8, 1974 in Namangan, city of flowers, Uzbekistan. He trained in philology. He has several books of poetry and translation to his credit, including Tunes of Asia (English translation of contemporary Uzbek poetry), The Island of Anxiety (poems in Uzbek, English and Spanish), Dream of Lightsome Dawns, A Miracle Is On the Way and I Leave You in Complete Boredom.  He also translated some ghazals and epic poem (‘Farhod and Shirin’) by Alisher Navoi, father of Uzbek poetry, into English. Azam also translated novels and short stories by famous Uzbek writers such as Erkin A’zam, Evril Turon and Salomat Vafo into English. Azam’s poems have been translated into more than 20 languages and published worldwide. He was a Creative Writing Fellow at the University of Iowa in the U.S. (2004) and a writer-in-residence at LCB in Berlin (2017).  He attended poetry festivals, creative writing workshops and cultural events in over 20 countries. In collaboration with Uzbek poet Bahrom Ruzimuhammad, Azam compiled two international poetry anthologies, Fish and Snake and The Language of the Birds, involving hundreds of contemporary poets from around the world. He is also a World Poetry Movement’s coordinator of poetry events in Uzbekistan, and one of the founders of Maysara literary and cultural club at the Yudakov and Oybek House-Museums in Tashkent. In 2018, Azam launched the first-ever Writer/Artist Residency Program in Uzbekistan for foreign authors and artists (http://azamabidov.uz/?cat=29). Azam lives with his wife, journalist and poetess Nodira Abdullaeva, and with his three sons in Tashkent, Uzbekistan.

BACK TO POEMS
Go to Top